I am behind, so behind, on listening to the three podcasts I haven’t abandoned because…time. So, this is a response to a month old WDWRadio podcast about things to collect at Walt Disney World. I am a collector, less so now than when I was a kid. As a kid, I may have been more a borderline hoarder. I am more selective these days but the collections I still have almost all have a Disney tie. Exhibits A-D: 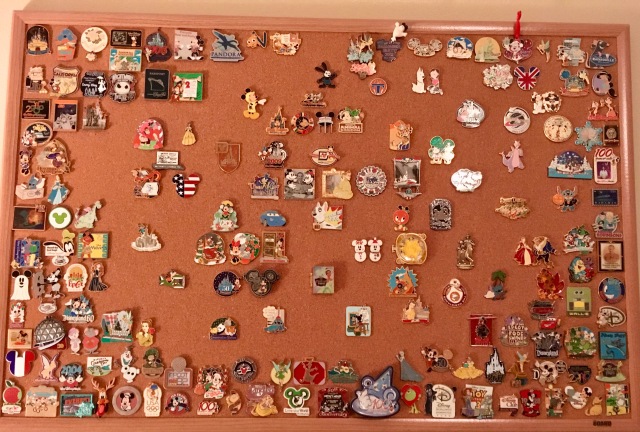 A recent snapshot of my WDW pin collection; still have room to grow!

1) Pins. Let’s start with the obvious one when it comes to me. Mom and Dad had no idea what they were starting when they brought me that first lanyard with four tiny little pins from each park back in 2000. I outgrew the lanyards a long time ago and display my collection on a pegboard now. I know, I know. You’re supposed to wear and trade them but I put a lot of thought into my pins. I pick characters or movies to hunt out each trip or buy pins to commemorate certain events I attend in the parks or even certain trips. These are touchstones for me, not something to trade away. I bought a Cinderella pin the year I did WDW with my best friend from high school and that’s her favorite character. I hunted an entire trip to find a Hunchback of Notre Dame pin one year (I finally hunted it up in the Animation store at DHS – I really miss that store). I have pins from all the festivals I’ve gotten to (Flower & Garden, Food & Wine). Each party I’ve gotten to attend has a pin; I have pins for things that don’t exist anymore (Osborne Spectacular of Lights is one of my favorite pins). I expanded my collection to include Disneyland pins for my first trip back to the original parks in 2012 and then for my trip last year in 2016. I love looking on my board and remembering where all the pins came from and which trip they belong to.

2) Maps. In re-organizing my giant memory chest a year or so ago, I found I’d stopped collecting these (I hadn’t really realized I was collecting them). I meant to start back up this year but I rely so much on the app now, I never think to grab a map as a souvenir. I’ll go again at least once this year so I need to get maps! As a kid though, I was religious in keeping a map from each park for each trip and they are a blast to look through now. To watch the parks grow and change over time is a true Disney Nerd moment. 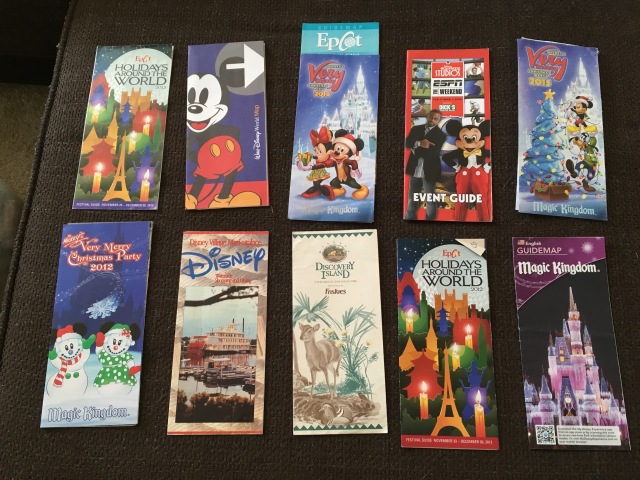 I am especially proud of that bottom middle one! RIP Discovery Island

3) Postcards. These are something else I often buy but don’t think that I’m collecting them per say. However, I have postcards everywhere – whether it’s a postcard of the parks or a postcard version of a piece of art I couldn’t afford – I have tons of these, some out for display but most stored away. I always had in the back of my mind I would frame and display all these eventually. Maybe someday I will. I really should just go for a “Disney Wall” some place in my apartment and see what I end up with.

Apparently, I really liked that one that I bought it twice LOL

4) Books. Disney, hear me out. Give me a bookstore in Disney Springs already. Just take my money! I will give it to you. I have to hunt for books in the parks these days. There used to be some guarantee go-to spots to find them but even most of those are gone now (The Writer’s Stop, The Animation Shop (we lost so much when this went away clearly), the book wall in World of Disney). As a bookworm, I love to pick up books when I travel. As a kid, I collected the Disney history books in the parks including the coveted Since the World Began by Jeff Kurtti which I lugged all over the Magic Kingdom one trip (I just had to buy it early in the day). These days I pick up books wherever I can find them on property. The gift shop tucked back in Fantasyland often has some of the Beauty and the Beast books being published (though not all of them, Belle is disappointed in you Disney). You can also usually hunt out the Figment comics in the gift shop after the ride and, oddly enough, I have good luck finding them at the Contemporary Resort. I may have swooned on my last Disneyland trip when I found an ENTIRE WALL of books in the shop attached to their Animation area. Seriously Disney, take all the books (your publishing arm pushes out enough of them) and put them in a small shop in Disney Springs. I could probably single-handedly keep it open for you.